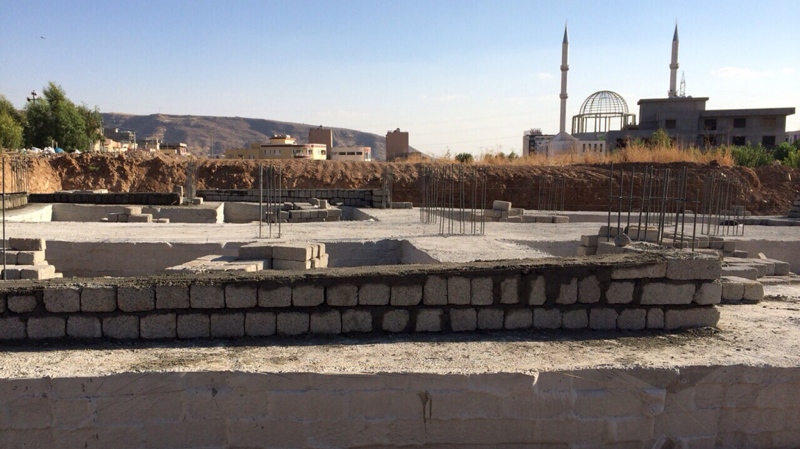 THE CHURCH NEXT TO THE MOSQUE: Two very different views of the future are under construction right now in Dukok, Kurdistan of Iraq.

Recently our President said that what’s going on in Iraq, Syria and other parts of the Middle East is not a Religious War. While I understand his reasons for saying this, it’s still hard to swallow when the people who want to destroy us refer to their cause as Jihad (Holy War) and themselves as Jihadists and have declared themselves a Caliphate. This is not new with ISIS in Syria and Iraq. This has been going on in the Islamic world every since the founding of the State of Israel in 1948. Historically, it goes back much further to the Middle Ages. We seem to forget that the objective of Islam has been the dominance of the Middle East (the birthplace of Judaism and Christianity) and then Africa, Europe and the Western World.  When we see Christians driven from their homes on pain of death if they do not convert to Islam with the express purpose of eradicating Christianity from the M.E. I’d have to say this without a doubt is a religious war. Even if we use the Moderate Islamic definition of Jihad as a spiritual struggle or Spiritual Warfare, it comes down to the same thing; a war for the souls of men.

I’ve not forgotten the day when Pastor Layth opened his first church in Duhok. The Mullah from a nearby mosque came by and told him, What do you think you’re doing? You can’t open a church here. Pastor Layth’s reply was, We have permission from the Government. The Mullah threatened him with reprisals and left. When Pastor Layth reported this incident to the Kurdish authorities they removed that Mullah from the city. Many of these Mosques in Kurdistan region are opposed to the Regional Government and preach Jihad from their pulpits. Islam is well established and well funded. We are not. We are totally dependent on your help and vision for our work.

By faith Pastor Layth has prepared the land, laid the foundation and has now laid the first blocks in the wall. The importance of this Multipurpose Worship Center cannot be overstated, it is critical to our future and our objectives in Iraq and the Middle East. Right now we’re working desperately to get the first floor finished so we can start functioning from the site. If ever there was a special time to build a church building it’s now. The community is overrun with refugees and IDPs (Internally Displaced Persons) who are refugees in their own country. Our Church will serve as Worship Center, Clinic, Supply Depot and Shelter and with winter coming the need is critical. This is going to be a rough year for millions of people in the M.E. but it’s also a great opportunity for the Church to Shine and it’s message of Redemption to be validated. As Jesus, said,

“I am the way, the truth, and the life: no man comes unto the Father, but by me.”

This isn’t just about a facility, it’s about a message

and the demonstration of that message in action.