The Big Picture as it unfolds into 2019

It’s a process, it’s real and it’s happening before our eyes! But sometimes we lose sight of this reality in the flurry of information thrown our way on a daily basis. Then there’s the shear magnitude of the task and the efforts involved; they may not realistically register in our thinking. I credit much of this to how we receive and digest information in what’s come to be known as the information age.

“IN THE FUTURE, EVERYONE WILL BE
WORLD-FAMOUS,
FOR FIFTEEN MINUTES”
-ANDY WARHOL

Make that 5 minutes Andy. With the of arrival internet technology the artist’s prediction has seemingly come to pass.

THE EARTH IS FLAT,
AMERICA NEVER WENT TO THE MOON,
THE ALIENS ARE COMING!
BIGFOOT’S RUNNING AMUCK IN ALL FIFTY STATES.
ELVIS IS STILL ALIVE!

Mix this with the fact that everyone now has a voice and an opinion about most everything and the tools to express it and you have a World with a very short and jaded attention span. This doesn’t mean we don’t care, we can simply be overwhelmed by the abundance of it all.

THE MIRACLE OF IRAQ, EGYPT, ISRAEL
AND THE MIDDLE EAST

Do you realize that prior to 2004, Iraq was virtually closed and isolated from the outside world and to the Gospel? Until recently, the Middle East has been regarded as the most resistant and unproductive mission field on earth. Few, including me, had a burden for it. Yet the peace and prosperity of the whole world has centered around the fortunes of this region for the last seventy years. Actually, much longer than that when you factor in world history and take into account that this region of the world has spiritually always been the turf under dispute.

The Middle East Conflict has virtually shaped the world we now live in. The rebirth of Israel and the prophetic miracle of the return of Jews to their homeland after nearly two thousand years of exile has had the fingers of the Superpowers on or near the trigger buttons that would launch World War III since 1948. The Doom’s Day clock established by concerned Nuclear Scientists in 1947 has hovered at two minutes until Midnight for some time now.

We’ve witnessed the prophetic warnings of the Bible unfolding before our eyes. The alignment of nations, the largest humanitarian crisis in terms of human displacement since WWII; the result of the Syrian Civil War. Iran, Turkey, Ethiopia, Libya, the Saudis, the Superpowers, they’re all in place. Today’s headlines read like the Bible’s prophecies. Wars, rumors of wars, nation rising up against nation … but the end is not yet.

IS THERE ANY GOOD NEWS OUT THERE?
ABSOLUTELY! – YOU’RE IT!

The constant barrage of bad news and catastrophic events (good new doesn’t sell) is responsible for our resultant apocalyptic mindset; to the point that we can miss the fact that there is a Bigger Picture, GOD’s picture.

Having lived and ministered in the Middle East for many years, I’ve found that my horizons have significantly broadened to an understanding that there may be far more going on in terms of God’s purpose in the prophetic and its fulfillment than the popular assessments of our day take into consideration.

Prophecy was given so that we’ll be aware of the times when they drew near and be able to locate and orientate ourselves regarding them. Still, if not careful, we can overlook this bigger picture and its meaning; That of the opportunity for World Redemption. Despite all the negatives, the facts are that right now there is an unprecedented response to the Gospel of Jesus Christ worldwide.

THIS IS A SEASON OF OPPORTUNITY
BUT IT WON’T LAST FOREVER.

Millions of lives are at stake. People in the Middle East started coming to Christ by the hundreds, that’s now escalating into the thousands, soon we’ll hear of hundreds of thousands and beyond.

I feel that it will be a quick work, but not in the simplistic idea that it just happens overnight. The task is mind bogglingly huge! 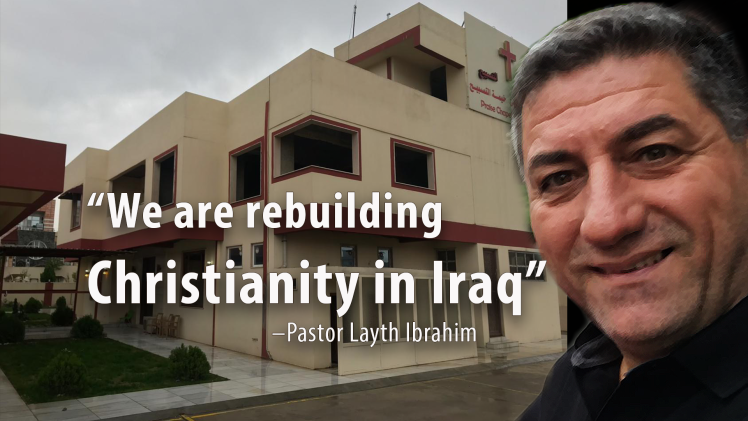 We’re talking the about the reestablishment of Christianity in the very lands where it began and was later driven out, almost to the point of extinction. All that is now changing.

This is serious business! There are evil and hostile forces bent on preventing the Gospel from gaining a new foothold. Just this last year and early this year, in Egypt, in the very place where we work, we’ve seen Christians massacred by radical anti-Christian forces. The same has been true in Iraq. At the same time we seen favor and even protection from the governments now in place within these nations. Do we get the significance of this? GOD Himself has opened doors that no man can shut but if we don’t understand this, these same doors of opportunity can be ignored.

“WE ARE REBUILDING THE CHURCH IN IRAQ!”
-PASTOR LAYTH IBRAHIM

Do we grasp the power and importance of what our brother has declared? When I went to Kurdistan of Iraq in 2004 I didn’t see another Born Again believer for three years. Today that has all changed, not only through our efforts but through the efforts of others as well, many of these we opened the doors for.

Today we have five churches which pastor Layth has planted and that’s not counting those he planted with our help before he joined our organization. Now we have a Middle Eastern Base of Operations, a full facility for training, conferencing and sending others throughout Iraq and the surrounding nations including Egypt where we are currently working.

This is an enormous task and it won’t be realized overnight. Line upon line, precept upon precept, brick by brick.

As most of you know, the economy of Kurdistan was decimated during the ISIS occupation of Mosul. That’s now past but the damage it did is not. The recovery is slow. Billions of dollars were lost, jobs evaporated, even government employees go months at a time working with no pay. The astonishing thing is that we’ve accomplished most of our building during this period but could not have done so without outside help.

OUR CONTINUED SACRIFICE AND SUPPORT IS VITAL
TO THE ONGOING SUCCESS OF THE MISSION.

OUR ENEMY WILL NOT REST, NEITHER CAN WE!
WE MUST HOLD OUR GROUND
AND VIGOROUSLY PUSH AHEAD TO GAIN MORE
IF WE ARE TO SUCCEED.

Big things are afoot for this coming year, you’ve already seen powerful results this last year in both Iraq and Egypt. We anticipate this will continue and be even more productive this year. If this is to happen we need you on board with us.

Watch as new and exciting things begin to unfold as we continue to build and enlarge our reach into these nations and expand our vision for World Evangelism.

Thank you! All who have gone the distance with us these years, you’ve made a crucial difference in the outcome. That which was once just a vision is now an expanding reality and GOD’s not finished with you yet.

Sincerely Your Brother and Partner in Faith,